Birth moms pic, tucked away in the [Junk] drawer.... 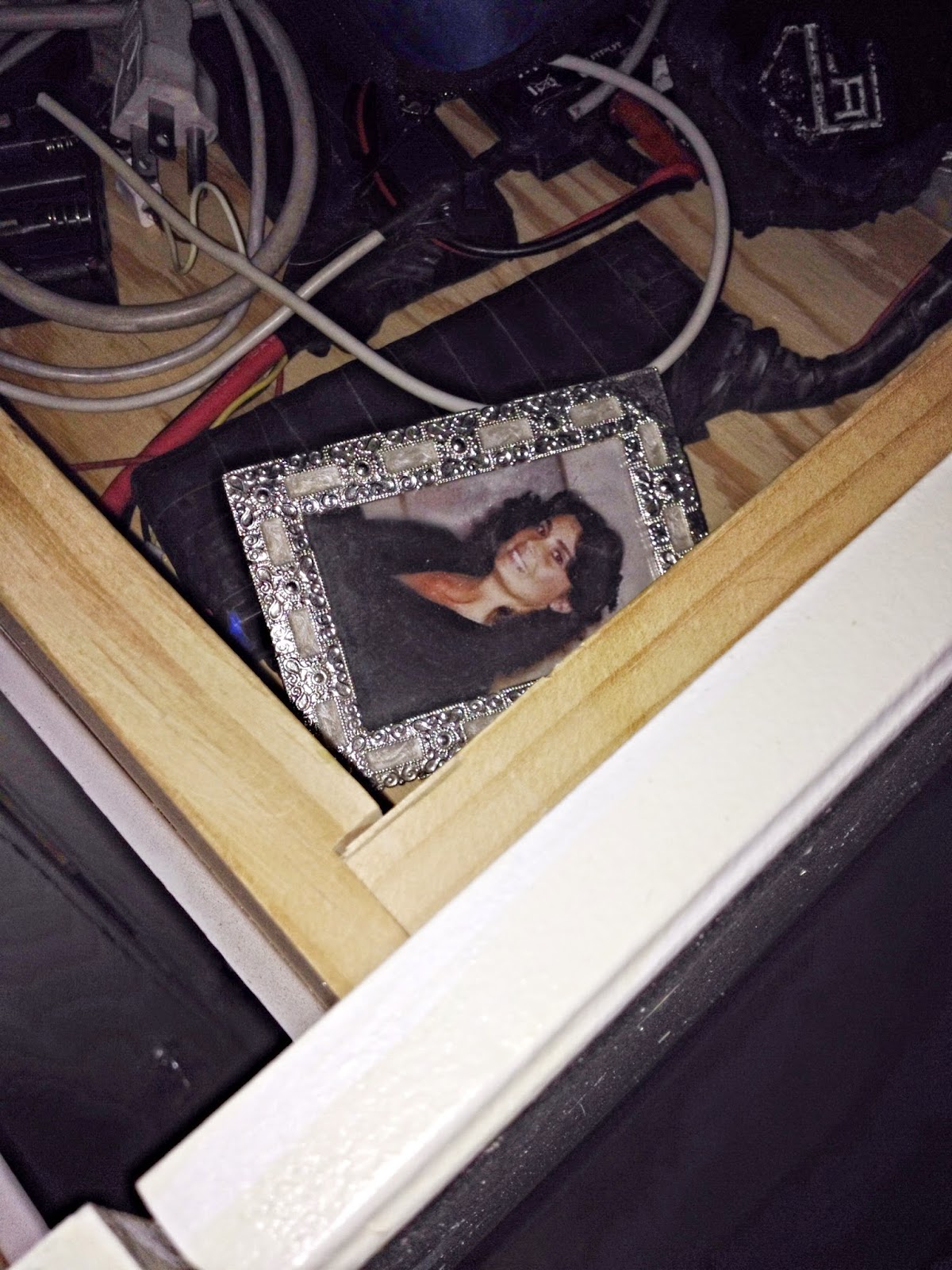 Its amazing how much stress one small framed picture of my birth mom has caused me.  Maybe its more of a debate, within myself?  The picture in the frame is of the "Old" birth mom, before she changed.  When we first met, this is what she looked like.   I cannot explain how much she's changed since this picture was taken, back in 1984.  Yeah, we all change, I know.   But, she was drastically different, she was married, lived in a nice home, did not work.  Loved to garden, sew, cook and smoke salmon.  Once her husband left her, everything went to pieces.   Her views on life became jaded, and she's yet to recover.   That was around the time we were married, 27 years ago.   Considering we've been in reunion since 1984, that pretty much tells you we've had a dysfunctional, painful and disappointing relationship most of our reunion.   Its been a battle, a fight to try and hold onto the birth mom I  initially met, and liked!

I cut all ties with Nancy in February of 2014.  Nancy is my birth mom, by the way.  We had been talking again, but I have not seen the woman in so many years its mind boggling.  Over the past few years she's refused to meet me anywhere, that really puzzled me.  I chalked it up to the fact that my birth brother and I don't like one another, and she is so involved in his life maybe it was hard to see me and keep it a secret?

Why do I have to be the one that is a secret?  Why can't my birth brother be the secret?  I've done nothing wrong, except protect myself from unnecessary harm due to both of their indiscretions, to put it lightly.

She thinks I have a problem because every time we start talking, I cut it off.  She cannot have a relationship with me without rambling on and on about my birth brother or telling half truths about his life.  Drives me nuts, that she lies.  Without getting into details and telling stories, this is the bottom line.  I told her that I can have a relationship with her only if my brother is out of the mix.  She cannot do it, and so I have chosen to walk away.   Its not that simple, writing this makes me sound shallow, and unable to bend.  As I've blogged about in the past,  craziness happens in our lives when my brother is allowed even an inch.  Craziness happens with Nancy in my life too, but both of them puts me over the edge.

The process of accepting this is brutal.  I took her picture out of that junk drawer so many times.  I mean put it up, took it down over and over again until it found its resting spot for now.   There is shame involved in this, not shame for wanting her in the drawer, but for even having her pic in a frame.  Does she deserve to be displayed amongst the loves of my life?  What does she deserve?  Truth is I don't have the answer.  Maybe what she really deserves I am not giving her?  Or, because of her life choices she has changed what she deserves?  Does it matter how bad she is?  If she were decent and honest, I would probably allow her pic to be placed next to my loved ones.   I would not allow my brothers picture to be anywhere in my house.  That man is turning 40 next month, has threatened one too many times to kill my entire family, so honestly he deserves absolutely nothing on the subject of loyalty.

Today, I do not miss her, I do not want her around, nor do I have the desire to even chat with her.  I always have this silent battle inside about her, because she thinks I have the problem, not her.  That bugs me!   She can't own what she's done, and quite possibly she has buried it so deeply, not even she can see it herself.   I have apologized to her many times, saying that I am greatly sorry that I cannot tolerate her being less than truthful about my brother, and every time things go well for the two of us she muddies the water by bringing up his craziness.  Then, later on she tells people that "Her daughter" is crazy"!!!!  Yeah I'm crazy, sick and tired of her lies, and her deceit, and her betrayal and have come to the conclusion she is not mentally well, for whatever the reason.  She does take a lot of pain meds she really does need, so maybe her mind is clouded and confused a lot?

Why does adoption always feel so yucky inside to me?  Why am I the one that is always battling inside, when its obvious I am the only one doing this,  the others don't give a darn.  They probably don't suffer inside like I do, they were never put in this position to feel as though they have to "Manange" so many people, only the adoptee is left to battle this, and I honestly think we are supposed to do it in silence, suffer in silence, and endure the long and difficult battle of reunion alone.
Posted by Meow at 7:11 AM

Meow
I'm an adult adoptee, reunited for many years